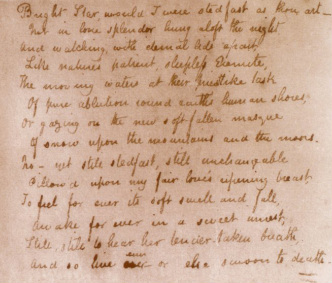 Bright star, would I were stedfast as thou art -
Not in lone splendour hung aloft the night
And watching, with eternal lids apart,
Like nature's patient, sleepless Eremite,

The moving waters at their priestlike task
Of pure ablution round earth's human shores,
Or gazing on the new soft-fallen mask
Of snow upon the mountains and the moors -

No - yet still stedfast, still unchangeable,
Pillow'd upon my fair love's ripening breast,
To feel for ever its soft fall and swell,
Awake for ever in a sweet unrest,

Still, still to hear her tender-taken breath,
And so live ever - or else swoon to death.
http://upload.wikimedia.org/wikipedia/commons/2/2b/Brightstar.jpg
See Poem Link

The main theme of this poem is the idea of eternity. From the first line - would I were stedfast as thou art - we can see that the speaker of this poem wants to be as stedfast as the star. Also, we can tell that the speaker is referring to the North Star, which is the only star that is motionless in the sky. Another link to this idea of eternity is shown in line 3 - watching with eternal lids apart. The speaker uses personification here to create a stronger image in the reader's mind. He imagines the star as a person with eyelids, always watching.

What the steadfast star does is eternally watching from afar the water washing around human shores or the snow covering mountains and moors. It is depicted as a sublime and pure world with words like "priestlike", "ablution", yet a world of coldness and loneliness. As a matter of fact, from line 2, the speaker already shows his unwillingness to be like the bright star, hanging alone in the night sky. The oxymoron used here - a lone splendour - shows his opposite feelings toward the star. Keats purposely presents a barren landscape to emphasise the loneliness. A bitter feeling arises and urges the speaker to escape from such solitude and seek human contact instead of living like an Eremite (hermit).

So, at the beginning of line 9, a very strong word - No - expresses once again the speaker's negative attitude to the situation of the bright star. However, he keeps sticking to its steadfast and unchangeable quality. The eternal quality is rather desirable when in contact with human feelings, like love. From line 10 on, Keats goes in great length describing the happiness by lover's side. In line 12, another oxymoron is used - awake for ever in a sweet unrest. The word unrest is usually used as bad adjective, but Keats thinks of this unrest as a pleasant feeling.

Throughout the poem, Keats uses poetic devices as well as effective vocabulary to create a melancholic tone. It is first experienced in the second line with the word 'lone'. Although this word is immediately followed by 'splendour', this phrase 'lone splendour' doesn't give the reader a jolly feeling. Another example is shown in the fourth line. The words such as 'sleepless' and 'Eremite' suggest more like emotional seclusion. In ancient English, still means always. The words "still" and "ever" are used many times to stress the theme of steadfast and eternity. In line 13, an alliteration is even created with "still". Most of all, the last word "death" significantly strengthens the mood of melancholy by concluding everything in the end.

This is a sonnet. Keats imitates the form of a Shakespearian sonnet that has a rhyme scheme of abab, cdcd, efef, gg. This poem follows the scheme, except in the third stanza, unchangeable does not rhyme with swell.

The speaker's quest for still life (eternal being) comes to an abrupt end with the poem's last 5 words - or else swoon to death -. Is he finally realizing the doomed failure of human quest for eternity and passively accepting it without choice? I believe, he rather enjoys a moment of ecstasy than a lifetime of solitude like the bright star.
Powered by